I saw Michael Moores movie in a stuffed cinema in Manchester, Connecticut. In the end everybody applauded. This didn't seem to me as a gathering of left-wingers, it rather seemed like a gathering of ordinary people (The New Yorker carries a nuanced review of the movie).

Before this movie does the same thing to public opinion on the Iraqi war as the Kim Phuc Phan Thi picture did to opinion on the Vietnam War, consider a different perspective. Robert Kaplan wrote an article in The Atlantic November 2002, several months before the war.

"Keep in mind that the Middle East is a laboratory of pure power politics. For example, nothing impressed the Iranians so much as our accidental shooting down of an Iranian civilian airliner in 1988, which they believed was not an accident. Iran's subsequent cease-fire with Iraq was partly the result of that belief. Our dismantling the Iraqi regime would concentrate the minds of Iran's leaders as little else could."

"[...] U.S. administrations, whether Republican or Democratic, are simply going to have to adapt to sustained turbulence in the years to come. They will get no sympathy from the media, or from an academic community that subscribes to the fallacy of good outcomes, according to which there should always be a better alternative to dictators such as Hosni Mubarak, in Egypt; the Saudi royal family; and Pervez Musharraf, in Pakistan. Often there isn't. Indeed, the weakening of the brutal regime of Islam Karimov, in Uzbekistan, will not necessarily lead to a more enlightened alternative. It could just as likely ignite a civil war"

Kaplan has his own agenda, but could he nonetheless be right?

Mr. Moore will not convince a die-hard republican to vote any differently this time, but he is stimulating the political conscience among the less so inclined. With or without the movie, voter turnout is poised to be higher this year as the stakes rise.

Email ThisBlogThis!Share to TwitterShare to FacebookShare to Pinterest
by Niels on Tuesday, June 29, 2004 "Grindsted Gymnasium". Picture of the class of 1993 (3.y). Picture was taken in 1995. Click to enlarge.
Email ThisBlogThis!Share to TwitterShare to FacebookShare to Pinterest
by Niels on Monday, June 28, 2004 [larger version]
"Søndermarkskolen". Picture of class (9.b) of 1984. Picture taken in 1993. Click to enlarge.
Email ThisBlogThis!Share to TwitterShare to FacebookShare to Pinterest
by Niels on Monday, June 28, 2004 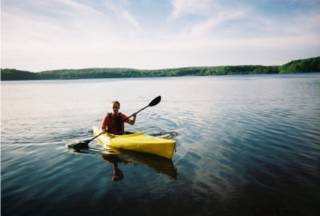 A few miles from University of Connecticut you will find Mansfield Hollow Lake. Mix that with sunshine, put a kayak on top of the soccer mom car and all problems in the world seem far away.
Email ThisBlogThis!Share to TwitterShare to FacebookShare to Pinterest
by Niels on Monday, June 14, 2004 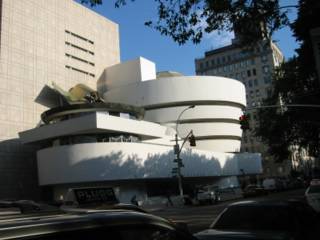 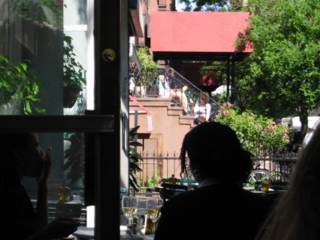 Brooklyn Heights at a Cafe. Love this part of town: Quiet but not too quiet while being near Manhattan. It is possible to rent a non-luxury one-bedroom apartment for around $1200. At a shop poster a female artist were looking to share an apartment "with a woman or an exceptional man". 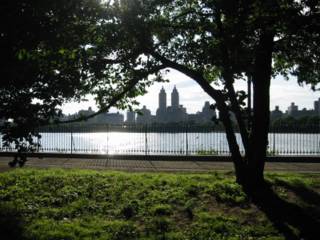 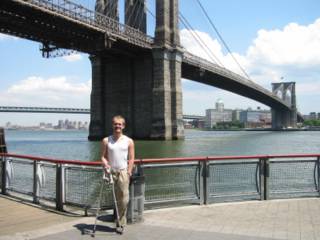 The Brooklyn Bridge and me. N.Y is wonderful on a sunny day. 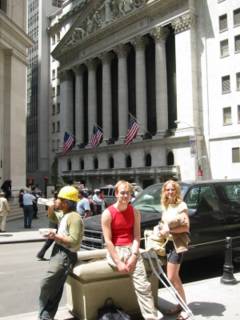 N. Y. Stock Exchange, my friend Berit and me in a very red tank. Further down the street a demonstration [NYTimes] was in progress. Workers were chanting for rent control and better pay. The yellow helmet to the left was part of the event, but obviously wanted to take a break.
Email ThisBlogThis!Share to TwitterShare to FacebookShare to Pinterest
by Niels on Sunday, June 06, 2004
Newer Posts Older Posts Home
Subscribe to: Posts (Atom)